"Mike's singing and guitar playing are as natural as oak cask fermentation leading to a heady brew that is truly pure of spirit." -FolkRoots Magazine, UK 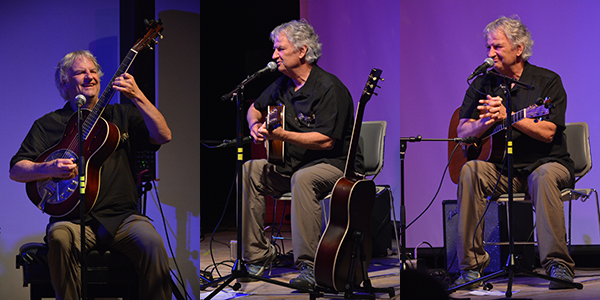 Mike grew up in central Wisconsin and early in his self-taught career he caught the ears of jazz violinist Joe Venuti, mandolinist Jethro Burns, and fiddle great Vassar Clements. He toured with Clements in the 70's and recorded with Burns and Venuti in Chicago, taking time off in between jobs to move to California when he had the opportunity to study with the late, great George Barnes. Barnes had been "the" session guy for many years, recording with everyone from Big Bill Broonzy to Tony Bennett.

"I was very fortunate to be able to spend some time with him," Mike says. "He was so tasteful, so rhythmic. He set the bar very high for me and he continues to be an inspiration."

Back to the midwest in the late 70's, Mike took a steady gig with Dr. Bop and the Headliners, a popular Chicago-based followed by a ten year stint in Nashville that led to a solo performance and teaching career that continues to this day. 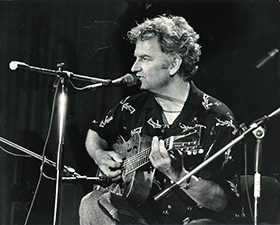 In 1994, after years of playing in various ensembles and a decade in Nashville playing sessions, fronting his own band, and writing songs for artists that included Del McCoury, Tim O'Brien, Kathy Mattea, and Emmylou Harris, Mike launched a solo performance career. Armed with an engaging voice, self-deprecating wit and an arsenal of elegant interpretations of old blues, swing, ragtime, and original tunes it didn't take long for Mike to capture the hearts of acoustic music fans and with the release of his first solo album, the critically acclaimed "Swamp Dog Blues", he began headlining at concerts and festivals throughout the world. In 1996, buoyed by his success as a soloist, he packed up his guitars and his fishing gear and moved from Nashville, Tennessee to a little mountain town in northwestern Wyoming.

Leaving Nashville didn't slow Mike down at all. He and Jan opened Wind River Guitar school in his Wyoming home and Mike began to tour throughout the world. He became a popular guitar instructor at guitar camps here and abroad and released 8 albums on his Wind River Guitar label and two more for Solid Air Records. Mike continued to play on sessions for other artists as well, including a hillbilly jazz recording called Airmail Special he did with swing fiddle great Buddy Spicher. Mike calls that project, recorded in Nashville in 2005 and featuring Calvin Vollrath on twin fiddle and the great Buddy Emmons on pedal steel guitar, the "most fun" he's ever had in a studio. Also in 2005, Mike won a Grammy for his contribution to Pink Guitar, a collaborative compilation of Henry Mancini tunes arranged and performed by twelve of the country's top acoustic guitarists. Pink Guitar, produced by Solid Air Records, was voted Pop Instrumental Album of the Year.

Twenty two years in Wyoming led to one more adventure, this time in Mexico where Mike and Jan bought a house and rode out the Trump years and the pandemic. They loved Mexico, Mike says, but a need to be closer to family in the U.S. led them back to the U.S., this time to Minnesota, just north of St. Paul, where in a beautiful area surrounded by wild land and water Mike continues to write, perform and teach. And keeps his fly rod at the ready.

In a decades long career laden with accolades and achievements, Mike is most proud of the 2007 Mike Dowling signature model El Trovador Guitar, the first artist model guitar the National Reso-Phonic Guitar Company ever manufactured. Although Mike would be the first to tell you he didn't design the guitar, National credits him with resurrecting the rare wooden-bodied resonator and making its warm, rich tone his signature sound. Fewer than 600 El Trovadors were manufactured in 1932 and 1933 and fewer still have survived. Mike found his, sorely neglected, in a pile of Dobro parts in 1987 while still living in Nashville. He lovingly restored it and performed with it for nearly 20 years. That guitar can be heard on many of his recordings, including his beautiful solo arrangement of "Maria Elena" from his Blue Fandango CD. When Mike was approached by National about collaborating on the reissue of this fine guitar, he enthusiastically embraced the project, working with the company for over a year on refinements to their prototypes. The final design of the re-issued El Trovador was based directly on Mike's recommendations and on his beloved 1933 El Trovador, now safely retired. In 2017 National honored Mike again with the release of the Mike Dowling signature model El Trovador Cutaway Guitar. Mike has also invented a pickup system for resonator guitars manufactured by National called the "Mike Dowling HotPlate."

Performer, composer, instructor, session artist, inventor. Everything guitarist Mike Dowling does reflects his love for and mastery of the instrument that has been the focus of his life for over sixty years.